Yara Suomi Oy Siilinjärvi mine: In an Open Pit Mine, Stone Gathers No Moss

E. Hartikainen has operated at Siilinjärvi apatite mine for 40 years. Stone gets transported from the open quarry’s levels to the crusher 24 hours a day, seven days a week. This requires the continuous maintenance and upkeep of the machinery as well as professional and responsible staff . The loading and transportation vehicles are mainly manufactured by Caterpillar, but there are also some Hitachis in the mix. 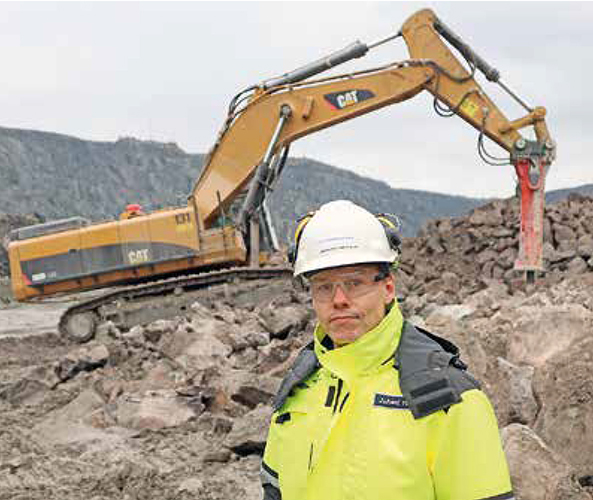 Site manager Juhani Tiikkaja was eagerly expecting the winter at the end of November. The continuous rain has made the roads and the loading areas very muddy. The frost will even out the roads so that they are more easily used by the heavy stone lorries. Although the possibly resulting slipperiness may prove challenging as well. But then again, you won’t have to travel far for some gravel. There is still plenty of waste compared to the ore as the mine expands width wise. 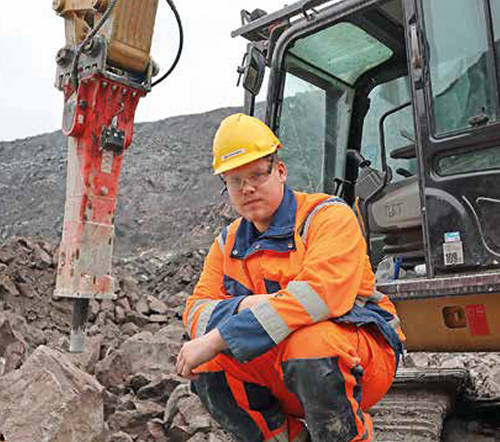 At Siilinjärvi, breaking rock is trusted to Rammer hammers. At the moment, there are four in use. The mine’s stone is challenging to quarry. One of the ore’s features is toughness. Despite a large specific charge, there are oversized boulders left after the blast. The loader operators try to separate the larger stones already at the quarry. But some larger boulders can still inadvertently find their way in to the big bucket. This is why a hammer is necessary at the gyratory crusher. The newest addition is the Rammer 5011E, which at the time of our visit was operated by Aatu Korhonen, who was still new to the task. The new hammers have e.g. RD3 remote control (RamData 3) as standard, which can be used for monitoring the work hours and the location of the hammer remotely on Google Maps. The device weighs 4,750 kg and it fi ts the 43 to 80 tonne base machines. The Cat 390D is at the higher end of the scale with its operating weight of 86 tonnes.

There is a total of 24 Cat stone lorries in action in two diff erent sizes: 145 and 95 tonnes. During shift changes, the line-up is rather impressive.

The mine can be admired from a vantage point at the edge of the mine, from where the 3,000 metre by 900 metre Särkijärvi open pit mine can be surveyed. The deepest point from the surface is now at 250 metres. Another, newer quarry is called Saarinen and it is located about fi ve kilometres from the main quarry.

At the Yara Siilinjärvi mine, apatite ore is quarried and the phosphorus separated from it is further refined into fertiliser at the more than 50 year old factory located next to the mine. E. Hartikainen has been handling the loading and transport of rock at the mine since 1979. After a few year’s break, Konepörssi went once again to visit the only phosphate mine in Western Europe and one of the largest open pit mines in Finland. The machinery is still massive and there is a lot of it.

The Siilinjärvi apatite mine is, if measured by amount of quarried rock, the third largest mine in Finland just after Terrafame Sotkamo and Boliden Kevitsa. In the year 2019, the mine quarried, loaded and transported about 11 million tonnes of ore and about 12 million tonnes of waste.

Siilinjärvi is responsible for almost 70 percent of the quarrying of industrial minerals in Finland, making it the biggest operator. The amount of waste rock has been large also in Siilinjärvi the past few years, because the surface of the eastern area’s extension must first be stripped of its overburden. When going deeper, the amount of waste compared to the amount of ore will get smaller.

The mine can be admired from a vantage point at the edge of the mine, from where the 3,000 metre by 900 metre open pit mine can be surveyed. The deepest point from the surface is now at 250 metres.

The surface of the quarries is about 180 hectares and the total surface area owned by Yarra is 3,758 hectares. So there is still lots of mining left to do in the coming years. The ore reserve in the main quarry has been measured to last at least until the year 2035. Continuing operations after this would require new ore reserves. Yara has begun mapping out new ore reserves in several areas, of which the most potential is showing the nearby Laukansalo area.

Yara is a significant employer in the Kuopio area and the biggest in Siilinjärvi. Including contractors, there are 750 persons working at Siilinjärvi every day. 175 of these work for Hartikainen.

“At the moment we are operating in the main quarry on level -74 and in the eastern extension area the level is +66 metres. The deepest level is -30 metres. The distance between levels is 14 metres”, states Juhani Tiikkaja, who started as site manager at the mine in 2015.

A tour of the quarry

Once we have donned all the safety gear, Tiikkaja and I jump into the car and head for a tour. There was snow before, but now at the end of November it has melted leaving behind sludgy roads and loading areas. The vehicles are also coated in mud, but stone travels even in poor conditions. And it has to. Roads are built and repaired as needed.

There is a specialized fl eet of vehicles dedicated to the maintenance of the roads. When the driver has to handle a fully loaded, 250 tonne rock lorry, the foundations need to be in order. Whether sludgy sleet, slippery ice, extreme cold or dry dust. Ore travels to the crusher 24 hours a day, seven days a week. “This is hard work and safety is our priority in all operations. We are now at 850 days without incident”, says Tiikkaja.

One of the systems monitoring the wall safety in Siilinjärvi is a radar system, which scans the walls in three-minute cycles around the clock, sends the acquired data through 3G to a server and reacts to wall movements that are less than a millimetre. The alarm threshold is 1-2 millimetres of movement per hour.

Container radars are positioned on the edges of the quarry and they scan the walls at a maximum distance of 4 kilometres. In addition to the three container radars, one such radar has been mounted on a trailer to be moved as needed. They serve, in addition to e.g. the monitoring of the whole quarry, also in the regional monitoring of special sites. There is need for one more radar, so that the walls of both quarries can be covered.

There is less than an hour to go until the blast after we have visited a couple of loading areas and have taken some birdseye view pictures of the quarry. The area to be blasted this time is about 100,000 solid cubic metres.

“Usually we have two blasts per week. Nowadays the maximum for one blast is considered to be 250,000 solid cubic metres. In that instance, more than 1,000 holes are drilled for one field. The average is about 150,000 solid cubic metres. You need to remember that the mine is located near residential areas and a road. This must be considered when planning blasts. There are strict limit values for noise and vibrations which cannot be exceeded”, continues Tiikkaja.

Tiikkaja says that fuel consumption is modestly speaking “a lot” and it gets delivered to the site daily.

In total, Hartikainen uses about 60 machine units at the Siilinjärvi mine. It's time or a shift change and the stone lorries stop for a moment. Quite an impressive row of Caterpillar machinery. The mine has fourteen 140 tonne Cat 785D and ten 90 tonne 777F stone lorries in continuous use.

In 2011, the 290 tonne Cat 6030 excavator was the first of its kind in the world to be delivered to a customer. It is equipped with a 17 cubic metre bucket. It is powered by two Cat C27 diesel engines that together produce 1,140 kW (1,530 hp) of power. This model was known before as the RH120E and it was manufactured under the brands Bucyrus, O&K and Terex. Caterpillar acquired Bucyrus at the beginning of the last decade.

Another Cat 6030FS, this one about three years younger, is a front shovel model. Its bucket size is 16.5 cubic metres. The third Cat loader is a slightly smaller 6020, weighing about 220 tonnes and with a bucket size of 12 cubic metres. The Cat C32 diesel engine provides 778 kW of power which is 1,058 hp.

So that is the information on Hartikainen’s massive loading equipment in its brevity. Once the aforementioned stone lorries and excavators are joined by all the other earthworks and mining machinery, there is surely a need for a very own repair shop. Maintenance and repairs of all kinds are done in the shop’s modern facilities.

“The shop staff services the machines in two shifts according to the manufacturers guidelines. If necessary, we also utilise the services provided by the machine suppliers”, Tiikkaja summarises.

The oldest triple sevens already have 50,000 hours on the clock.

There is also a comprehensive Jigsaw fleet management system in use providing information on the movements of the stone lorries and the loaders. The system helps guide the vehicles to the right loading area as required. Even the position of the loader’s bucket can be seen in the system. The continuous loading output of the loaders can also be checked. The Siilinjärvi mine also uses satellite positioning in its drilling equipment.

3D machine control is used, for example on the levels of the mine and when building the banks of the tailings pond. Even at the spoil tip, the dozer levels the bank to a certain level.

The sheer size of the mine and the machinery at Siilinjärvi are awe inspiring. There is no messing about here. This is a stone race in which every component is integral.